Basket Get a quote

Quality is the top priority 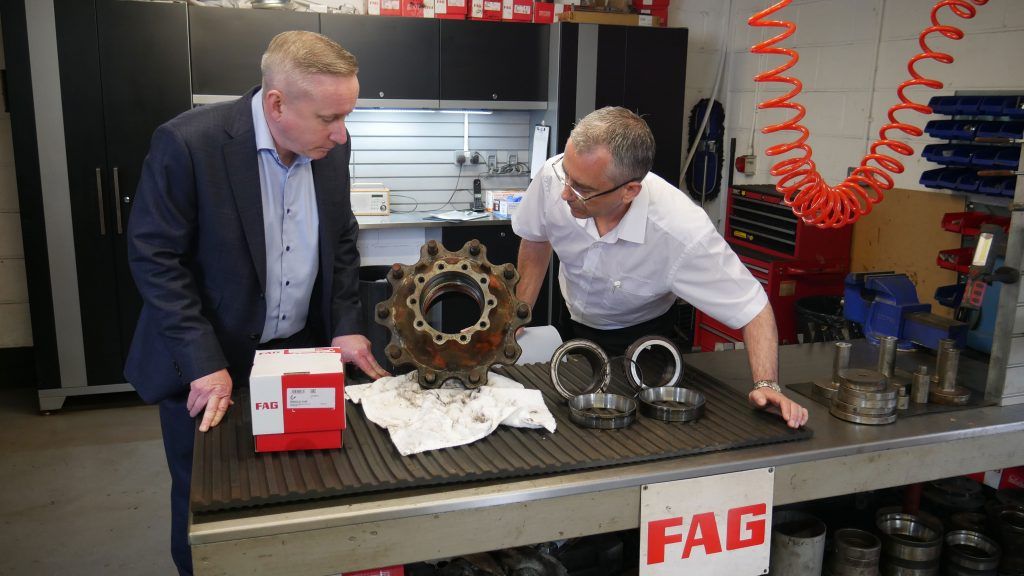 CV Hubs & Bearings on why it trusts FAG wheel bearings: ‘They set the standard!’

Commercial vehicles and wheel bearings, in particular, are subject to considerable driving forces throughout their lifetime, and so must meet strict requirements in terms of service life and reliability; therefore, it is essential that the internal components of the wheel hub are made with durable and tough materials, which can deliver a high level of precision and are resistant to wear – Schaeffler’s FAG RIU is the repair solution for the job.

The RIU consists of two original equipment (OE) specification pre-assembled taper roller bearings, which are sealed by a retaining ring. The ring ensures the bearings are not damaged and are held in place when the axle shaft is installed.

The maintenance-free FAG RIU features lifetime lubrication and is sealed against damage and contamination. Each FAG RIU box also contains a special press-in tool to ensure a correct installation and to help reduce repair costs by reducing time off-road.

CV Hubs & Bearings has grown exponentially from the small family business that began back in 2010. Almost a decade on, it boasts a purpose-built workshop, a dedicated team of technicians and support from OEMs, like Schaeffler.

CV Hubs & Bearings remanufactures both DAF and Volvo wheel hubs – Schaeffler is an OE bearing supplier to both – and, because of the general demand for repair solutions for commercial vehicle hubs, it also provides services for both trailers and public service vehicles.

Sitting in his office before one of the trained technicians demonstrated how each hub is assembled, CV Hubs & Bearings Managing Director, Simon Blair, explained how the link between the company and Schaeffler came to fruition: “When we started we trialed and tested various wheel bearings from lots of manufacturers, but, ultimately, we concluded that Schaeffler’s FAG bearing offered the best all-round performance in the HGV industry.

“Schaeffler sets the standard – the market leader – with the quality of its bearings, sealing systems, everything to do with the moving parts. Quality is the top priority for us; we can’t compromise safety with an inferior product.”

“We receive tremendous support from Schaeffler and Neil, in particular; in fact, it’s getting to the point where Neil should have his own desk! He’s fantastic, as he’s always on-hand if we have a query.”

Moving over to the workshop and the production process itself, CV Hubs & Bearings in-house technician began by carrying out a visual check of the wheel hub, estimating the DAF hub he was examining to be approximately seven or eight-years-old.

After detaching the retaining ring, the technician then turned his attention to the inboard and outboard taper roller bearings. Once more, he judged the condition of those and predicted that the roller bearings had racked up approximately half-a-million miles (FAG RIUs are tested to exceed 1,000,000km – over 600,000 miles).

Once the roller bearings were removed, the technician used a workshop press to push out the tracks from the hub. Using this gentle but effective approach reduces the risk of damaging the seated area.

Once separated, the bearing housing was wiped clean, which is vital, as the technician can inspect once more for damage and it minimises the chance of contamination. The wheel studs were then removed and final tolerance checks were carried out before the hub was placed into the sandblasting unit and then painted.

At this point, following additional parameter checks, the new FAG RIU was ready to be fitted.

Both the FAG RIU outboard and inboard bearing were pushed into place, again using a workshop press and the special tool that arrives in each FAG RIU box. CV Hubs & Bearings technician also used an additional metal pushing tool on top of the inboard bearing for support, which received a maximum pressure of five metric tons.

The penultimate part of the process was to insert the retaining ring, which made a satisfying audible click when securely located. CV Hubs & Bearings technician also ensured the ring was free to turn inside the bearing. Finally, the newly-assembled wheel hub received one final inspection and the pre-loads were checked.